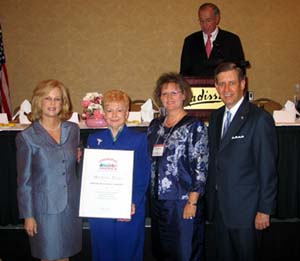 The City of Mesquite is one of the newest 15 Texas communities to be named a Preserve America Community by the White House, U.S. Department of the Interior, U.S. Department of Commerce and the Advisory Council on Historic Preservation. City Council members were recognized at the Texas Historical Commission’s Annual Conference luncheon held in Fort Worth on May 7, 2004.