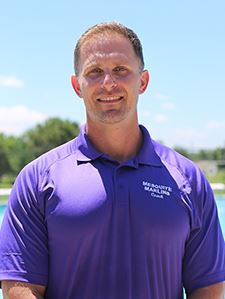 
Head Coach Dustin Holland will be going into his 20th year of summer league coaching. He has been the head coach of the Mesquite Marlins for the past 6 summers and a head high school coach for the past 11 years (5 in San Antonio and 6 as the Head MISD Coach).  When he started coaching the Marlins, there were only 62 swimmers on the team and last year the Marlins grew to 163 swimmers. His passion and work ethic is an example to all who are coached by him. Every child that comes to the pool is important and will get Coach Holland's best! He grew up in San Antonio , went to Tarleton State University on an athletic baseball scholarship. He has a beautiful wife Jenica, who grew up in the area and two awesome kids! Harper (7) who is on the team and Manzy Ryan (18 months). Coach Holland's dedication is second to none when it comes to the Mesquite Marlins, he continues to build and develop champions every year and we look forward to another great season.

Kat has been coaching for the Marlins for the past five years. She has also been a swim instructor for the past seven years and is CPR and lifeguard certified. Kat swam for all 4 years in high school and the Marlins for 12 years. She also received the Girl Scout Gold Award in her senior year of high school. Her passion is traveling, and scuba diving. Kat graduated from Eastfield College with her associates in science this past year, and plans to attend A&M Commerce and major in biology and teaching. Kat is a Marlin through and through and her enthusiasm for life carries over into all she does. 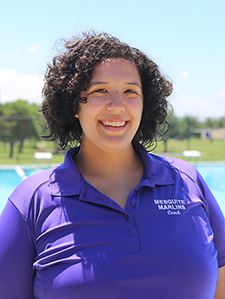 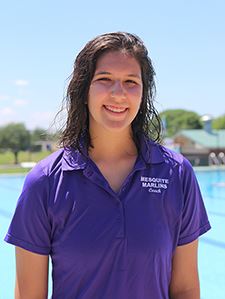 Annika was a volunteer coaches aid to the Marlins team for 4 years before advancing to an assistant coach in 2015. Joining the swim team as a young girl in 2002 the Marlins has been a part of her life for many years. Currently Annika is a student at  Richland College studying health science for physical therapy. In addition, she also plays bass clarinet for the Richland Wind Symphony.  Her years of experience with the Marlins is a great asset to our new team members by making them feel comfortable and confident to strive for excellence.