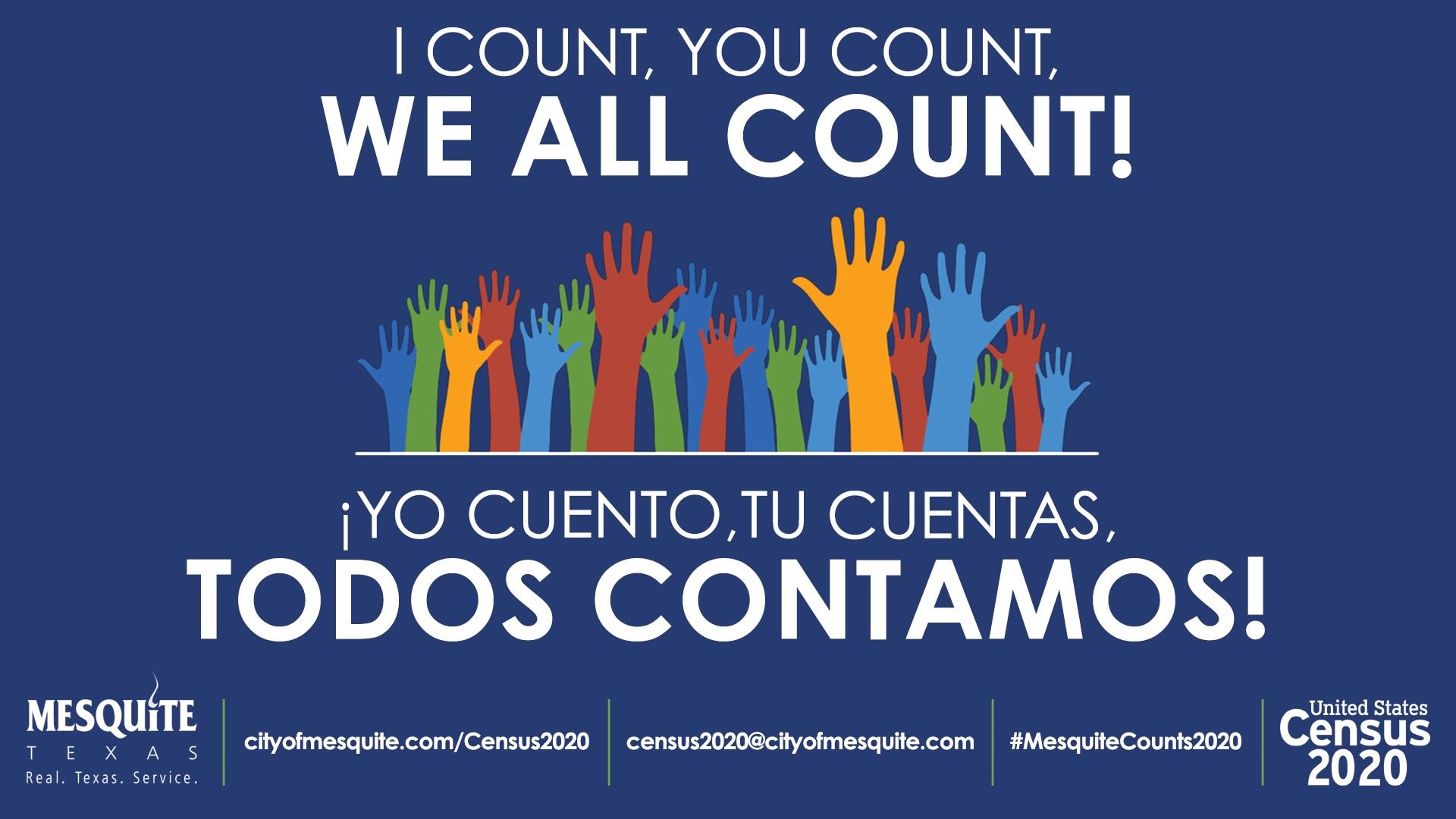 The City of Mesquite is participating in the U.S. Census 2020. Here are some brief facts:

Here are some details provided by the U.S. Census Bureau:

What is the 2020 Census?
Important Dates
Census Takers in Your Neighborhoods

Ways to Respond
Questions Asked
Who to Count
Contact Us

Why Your Answers Matter

Importance of the Data
Impact in Your Community

For more information, contact the Dallas Regional Census Center at 972-510-1800.

Click here to get more details on Census 2020 from Dallas County. There are Frequently Asked Questions answered and other resources to understand the importance of being counted.

For questions regarding the Census efforts throughout Dallas County email: info@dallascensus.com or call 469.491.9308.

Click here to watch a city staff presentation to the Mesquite City Council in January 2020 that further explains the Census process and the importance of everyone being counted.

Click here to listen to Mayor Bruce Archer speak to Jeff Armstrong, Director of Planning and Development Services, on KEOM’s Community Focus program about the Census and the importance of every Mesquite resident being counted.

It is critical that every Mesquite resident participates in the Census 2020 and is counted. Here is why:

For questions about about the Census in Mesquite, please email census2020@cityofmesquite.com

Mesquite, TX – February 26, 2020 – Mesquite continues its message “I Count. You Count. We ALL Count.” about the importance of each of its residents participating in the 2020 Census. Mayor Bruce Archer recently hosted an interview on KEOM 88.5 FM’s Community Focus segment to discuss the topic. The interview is available at www.cityofmesquite.com/radio.

Mayor Archer spoke with Jeff Armstrong, Director of Planning and Development Services, about the impact of every Mesquite household completing a 2020 Census. Mesquite estimates for every 1% undercount of its total population, it could cost the community more than $3 million in federal funds. Those funds could be used for healthcare, transportation, education and other local programs.

Armstrong explained that there will be three options for responding. This includes online, by phone or by mail. He indicated that Mesquite and all communities are encouraging their residents to complete it online, if possible, to help with faster data collection and to quickly address undercounted areas. Armstrong said, “The Census will be available in 13 different languages online and the Census Bureau will provide support in 59 different languages.”

The radio segment reminds listeners that responses are safe, secure and protected by federal law. And, all information in the responses can’t be used against anyone, in any way.

The United States Census Bureau plans to begin mailing 2020 Census information during March. And, will have Census takers begin to go into areas and neighborhoods during May to address undercounted locations. All Census Bureau workers carry official government badges. The public can call the Regional Census Center at 972-510-1800 to verify a census worker’s identification.

For more information on the 2020 Census, email census2020@cityofmesquite.com.